Consider a spherical object, such as a baseball, moving through the air. The motion of an object though a fluid is one of the most complex problems in all of science, and it is still not completely understood to this day. One of the reasons this problem is so challenging is that, in general, there are many different forces acting on such objects, including:

In most introductory physics and dynamics courses, gravity is the only force that is accounted for (this is equivalent to assuming that the motion takes place in a vacuum). Here we will consider realistic and accurate models of air resistance that are used to model the motion of projectiles like baseballs.

Wrigley Field in Chicago, Illinois is the home of the Chicago Cubs baseball team. In baseball, an “out of the park” home run is scored when the ball is hit beyond the green outfield (past the yellow foul pole at the left of the above image). Image source: Flickr image by Mike Bash (CC BY NC ND 2.0) (full-sized image).

The free body diagram for a baseball subject to gravity and air resistance. Observe that the drag due to air resistance is always in the opposite direction to the velocity. Image credit: Microsoft clip art.

Drag coefficients as a function of Reynolds number

An important result in fluid dynamics is that the drag coefficient is a function only of the Reynolds number of the fluid flow about the object. That is, \[ C_{\rm D} = C_{\rm D}({\rm Re}). \] This functional relationship has no closed form. However, the relationship has been established numerically based on experimental data. See Figure #aft-fd for a schematic diagram of the drag coefficient's dependence on the Reynolds number. 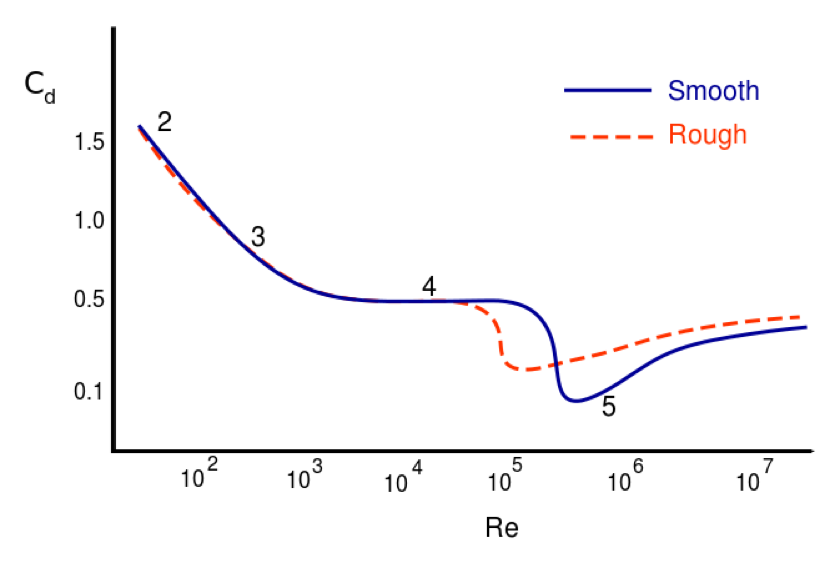 Experimental dependence of drag coefficient on Reynolds number for a sphere. Image credit: NASA via Wikipedia.

In the presence of gravity and quadratic drag alone, the net force on an object is given by \[ \sum \vec{F} = m \vec{g} - c v^2 \hat{v}, \] where $m$ is the mass of the object and $\vec{g}$ is the local acceleration due to gravity. Below is an interactive graphic showing the trajectory of an object with gravity and quadratic drag. You can change the various parameters to see their effects on the object’s motion.

There is no well-measured record for longest baseball home run. It is claimed that Mickey Mantle hit a ball 643 feet (196 m), although this apparently included rolling on the ground. Other power hits by Mantle are reliably measured to be over 500 feet (152 m).

Given that the record for fastest speed off-bat is around 120 mph (53.6 m/s), the simulation in Figure #aft-ft shows that it is unlikely that Mantle's long hits could have occurred without some additional assistance from wind, ball spin, or other effects.