We are all familiar with the idea that turning the steering wheel in a car rotates the front wheels, causing the car to steer into a turn. But why do we normally steer with the front wheels rather than the rear wheels (or all four wheels, as shown below)? Do both front wheels turn the same amount, or is something more complicated going on? 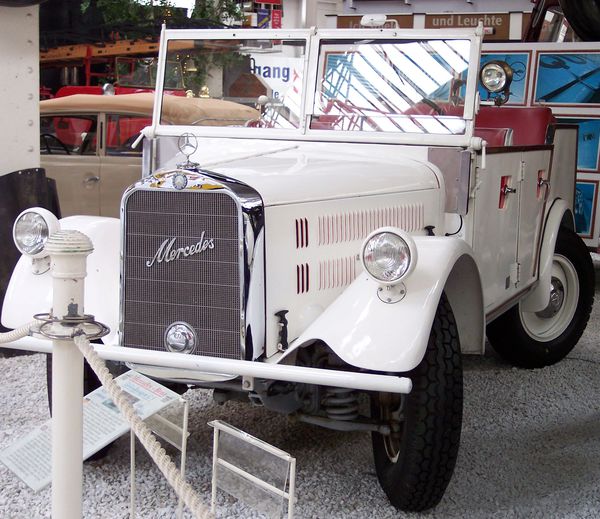 When a rigid body turns in a circle, the four corners of the body all move with different velocities and speeds. If we think of a car as a single rigid body with wheels at the corners, this means the four wheels move with different speeds and also different directions. Car designers can choose different steering arrangements, as shown below, where the steering can be with the front two wheels only (conventional cars), with the rear two wheels only (forklifts), or with all four wheels in some high-performance cars.

A car turning in a circle, showing the directions that the wheels must point as the turn radius $r$ and offset $d$ change.

Forklifts typically have fixed front wheels and steer with the rear wheels. This gives them great control over the position of the front lifting forks, but makes steering harder for the operator. Rear-wheel steering is a type of non-minimum phase control system. The technical definition of minimum phase is somewhat complicated, but for vehicle steering it essentially means that we have to steer the “wrong way”. For example, to turn right in a forklift we have to first swing the back out to the left. This makes it very easy to accidentally run into obstacles, and is also unstable at higher speeds. 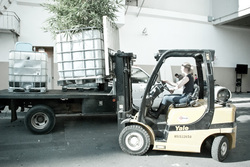 Sometimes in cars it would be convenient to also steer with the rear or trailing wheels, for example when trying to park in a tight spot. We actually have a mechanism for converting a car to trailing-wheel steering, which is to drive backwards, such as when parallel parking.

In a conventional car, the rear two wheels are fixed to point straight ahead, while the front two wheels must turn at different but matched angles. To achieve the correct front wheel angles, cars typically use a four-bar linkage as shown below. The pins at $A$ and $B$ are called kingpins (normally actually ball joints in modern cars), the $CD$ rod is called the tie rod, and the $AD$ and $BC$ rods are called steering arms. By correctly choosing the lengths of the linkage rods, the car steering will automatically produce nearly correctly matched front wheel angles to make a perfect turn with any radius of curvature.

Adjustable Ackerman steering geometry. The graph shows the radius of curvature for the two front wheels as a function of the rack offset $d$.

Three wheeled vehicles with two wheels in back and one in front (a delta or tricycle configuration) avoid the need for complicated steering geometry, leading Karl Benz to use this system in the world's first automobile. 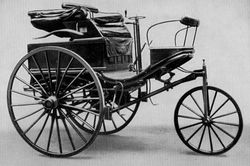 Episode 4 of Season 9 of Top Gear featured a segment on the Reliant Robin, a three-wheel car produced in the 1970s in the United Kingdom. This Top Gear episode clearly demonstrates some of the reasons that single-wheel steering systems for cars have not achieved long-lasting commercial success.

Three-wheeled cars were rather popular with British manufacturers in the 1960s and 1970s. As well as single-wheel-in-front models like the Reliant Robin, there were also production cars with a single wheel in the back (a tadpole configuration). An example of this is the smallest production car ever made, the Peel 50, shown in another Top Gear episode (Series 10, Episode 3).