For passengers in a car or train, traveling in a straight line at constant speed is the most comfortable motion, as there is no acceleration. Roads or rail lines with only straight lines are rather limiting, however, so we frequently encounter curves, in the most extreme form in large freeway interchanges such as shown below.

When designing a freeway interchange, one of the most basic questions just what shape the transition curves between the straight-line roads should have. Other considerations then follow, such as stacking the roads above each other and banking the angle of the roads.

The difficultly in designing curves in roads arises from the need to have a smooth ride for the passengers in the vehicles as they traverse the curves at high speed. In particular, we do not want to have sudden changes in acceleration for the passengers. 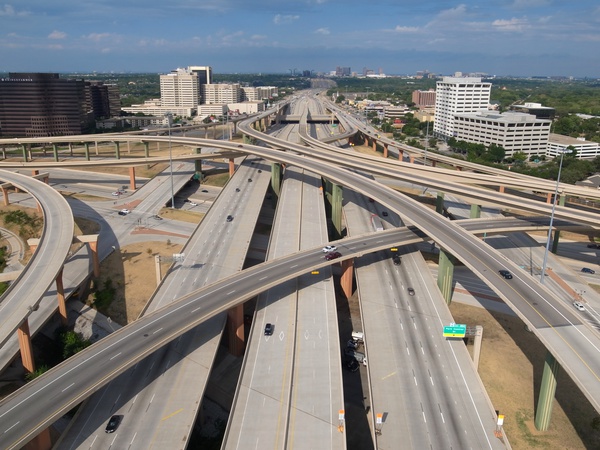 Aerial view of the High Five multi-level stack interchange between I-635 and US 75 in Dallas, Texas, taken with a camera suspended from a kite line. Image source: Fotopedia image, from the flikr image by Jett Attaway (CC BY 2.0) (full-sized image).

To understand the issues with transition curve design, we will consider a simple oval track with two straight segments joined by curves at both ends. The simplest curve shapes are semi-circles (half-circles), as shown below.

For passenger comfort, we do not want rapid changes in acceleration for transition curves. That is, we want a low value for the derivative of acceleration with respect to time. The derivative of acceleration is known as jerk, defined by $\vec{\jmath} = \dot{\vec{a}}$ (for vectors) or $j = \dot{a}$ (for scalars). With perfect semi-circular ends we see that the jerk is mathematically infinite at the transition to the curve, although in reality it would just be a very high value as the vehicle would not transition to the semi-circle instantaneously.

Jerk and snap have many applications in engineering and science. For example, jerk and snap have both been used to measure human movement smoothness and diagnose stroke patients (Rohrer et al., 2002) while minimizing snap is often used as a design principle for quadcopter control schemes (Mellinger and Kumar, 2011).

Changing accelerations (causing jerk) must result from changing forces, due to Newton's second law. Although the terminology is also somewhat loose in this case, the derivative of force with respect to time is often referred to as yank, and the derivative of yank is called tug (the second derivative of force). Third derivatives and higher of force are very rarely encountered, and do not seem to have any names in common usage.

If we the motion around the track with Euler spiral transitions, then we can see from the acceleration magnitude plot that the acceleration does not suddenly jump as the vehicle moves around the right-hand curve. Instead it steadily increases to a maximum value, before decreasing again to zero. The peak acceleration needed on the Euler spiral transitions is somewhat higher than on the semi-circle transitions, but we have avoided the sudden jerk associated with switching from straight line to circular motion.

The equation for a spiral with linear curvature variation was first derived by the Swiss mathematician Leonard Euler in 1744, hence the name Euler spiral for this curve. The spiral was then independently rediscovered in the late 1800s by civil engineers who were unaware of Euler's work and who named the resulting spiral the clothoid, which is still a commonly used name in traffic engineering. This spiral also arises in the study of near-field diffraction in optics, as developed by the French engineer Augustin-Jean Fresnel and the French physicist Alfred Cornu, for which reason the spiral is also sometimes called the Cornu spiral.

While specifying that $\kappa = \alpha s$ is enough to define the shape of the Euler spiral curve, finding the explicit equation for the curve is not so easy. We first introduce the functions $C(z)$ and $S(z)$, known as Fresnel integrals and defined by:

The Fresnel integrals do not have any simpler forms in terms of elementary functions, as the integrals in them cannot be computed in closed form.

Now we define the constant $\ell = \sqrt{\pi/\alpha}$, and then the position at distance $s$ along an Euler spiral curve is:

We start the spiral curve from the origin, initially moving horizontally to the right and curving upwards with constant speed $v$. Using a tangential/normal basis, let $\theta$ be the angle of $\hat{e}_t$ as shown. Then $\dot{\theta}$ can be found by considering two expressions for the acceleration. First, from the tangential/normal acceleration formula we have \[ \vec{a} = \ddot{s} \, \hat{e}_t + \kappa v^2 \, \hat{e}_n = \alpha s v^2 \, \hat{e}_n, \] where we used the fact that $\ddot{s} = \dot{v} = 0$ (constant speed) and that $\kappa = \alpha s$ for some constant $\alpha$ (the definition of the Euler spiral is that curvature is a linear function of distance $s$).

Plotting the Euler spiral equation gives the curve below, which starts out at the origin with zero curvature, and the then has steadily increasing curvature as we move along it.

Euler spiral shape defined by the equation above. Changing the value of $\alpha$ or $\ell$ simply scales the whole curve to make it bigger or smaller, without changing the shape.

The full Euler spiral is unsuitable for track transitions, as the curvature increases without limit. Instead, we can piece together short segments of the Euler spiral to form our transition curve. For example, the right-hand curve in the smooth track above is composed of two copies of the first quarter-turn of the Euler spiral, with one copy flipped upside down. This means the curvature starts at zero, increases linearly to a maximum halfway around the curve, then decreases linearly again back to zero to join the straight segment.

The Fresnel integrals $C(x)$ and $S(x)$ are examples of special functions. The term special function does not have a precise mathematical definition. Instead, these are functions which arise frequently in applications and which have been extensively analyzed and documented. The classic reference for many special functions is the book known generally as Abramowitz and Stegun. This refers to the publication:

While the tables of special function values in Abramowitz and Stegun are no longer generally needed due to the advent of computers, there is still much useful information in the book. This useful information is now also available in the online successor Digital Library of Mathematical Functions (DLMF) from the National Institute of Standards and Technology (NIST). For example, Chapter 7 of the DLMF includes the the definition of the Fresnel integrals as well as plots of the functions and series expansions for them.