Turning in a circle requires a vehicle to have a centripetal acceleration inwards on the turn, and so there must be some centripetal force that produces this acceleration. For a vehicle driving on flat ground, this force must be produced by a sideways friction force on the tires. This introduces two problems:

To avoid both of these problems, the road can be banked inwards, so that the outer edge of the road is higher than the inner edge. This is called superelevation and means that some of the centripetal force can be provided by the normal force with the road, reducing the friction force and minimizing the risk of slip or roll.

The figure below shows a bus driving around a sharp corner at high speed on a heavily banked road. To understand the dynamics of this vehicle and the design tradeoffs for cornering on banked turns, we need a model. We will start below with a simple point mass model, which will be enough to understand friction and sliding, and then move on to a 2D rigid-body body to understand roll behavior. 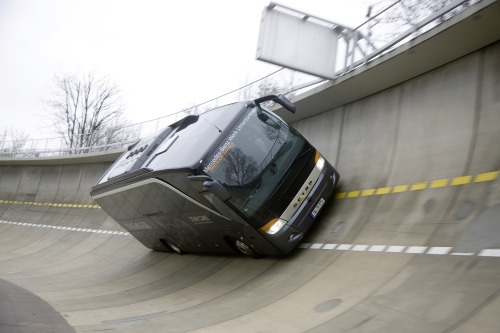 To understand the dynamics of the bus above, we first need a simple model of the geometry of the road. A satellite photo of the track is shown below. The bus was photographed while on the far-left-hand curve, which we can see is approximately a half-circle with radius about 50 m.

Satellite image of the Mercedes-Benz test track at Untertürkheim, on the Neckar River just outside of Stuttgart, Germany. The picture of the bus above was taken on the far-left-hand corner, which has a radius of curvature of about 50 m. Integrated with the test track is the excellent Mercedes-Benz Museum.

To make a simple model, let us consider a track with straight segments and half-circular ends, as shown below. If we the bus then we can see the for velocity, acceleration, and force as the bus drives around the track. We assume constant speed, so there is only an acceleration when the velocity changes direction around the corners. This model assumes semi-circular track ends, but this is not a good idea in practice.

The centripetal acceleration must be caused by an inwards force while going around the corners. To understand the magnitude and source of this force, we now consider a simple point mass model.

The modern automobile was invented in 1885 by Karl Benz in Mannheim, Germany, about 100 km from Stuttgart. The commercial success of the new invention was significantly aided by Benz' wife Bertha, who marketed the automobile by making the world's first road trip, inventing brake linings in the process. Driven by the post-WWI German economic crisis and hyperinflation, the Benz company later merged with Daimler to form Daimler-Benz, and began producing Mercedes-Benz cars in Untertürkheim, just outside of Stuttgart, where it is still headquartered. One of the company's engineers, Ferdinand Porsche, later founded his own company, which is also still based in Stuttgart.

Consider the bus as a single point mass on the track while going around the corner. The diagram below shows the bus front-on, so the inside of the track is towards the left. We start by assuming there is no bank on the road and that the bus is stationary. The shows that the gravity force \(W\) is balanced by the normal force \(N\) from the road. If we now increase the bank angle \(\theta\) below, then we see that a friction force \(F\) tangential to the road is needed to keep the bus from sliding. In practice, this force will be limited by \(F \le \mu N\), where \(\mu\) is the coefficient of friction. If we incline the track until it is nearly vertical, we see that there a huge friction force would be required but only a tiny normal force is available. As this would not be possible without gluing the tires to the road, this situation would result in the bus sliding downwards towards the center of the track.

Now set the bank angle back to \(0^\circ\) and make sure the speed is zero and that the is visible. Now increase the speed of the bus to produce a centripetal acceleration. Newton's law implies that there must be a centripetal friction force producing this acceleration. As the speed increases, we will eventually reach a point when the friction force required is too large and the bus will slide outwards on the track.

To avoid sliding outwards, we can increase the bank on the road. This increases the normal force and decreases the friction force, making it less likely that sliding will occur. For any given speed, there is some angle that exactly cancels the friction force, so that all the force is normal force. This is a very safe driving situation, as no sliding is possible, even in very slippery road conditions. On the real track, the bank angle increases as the bus drives higher. This allows the driver to select the correct incline angle to minimize sliding risk. We can also show the forces in or as total vectors as we change the bank angle and bus speed.

While this simple point mass model allows us to understand how banking the road can help with the problem of sliding, it does not tell us anything about rolling of the vehicle, because point masses can't rotate. We thus need a rigid body model to investigate roll.

Higher speed and a smaller radius of curvature on a circular track allows higher bank angles, as in the photo below. 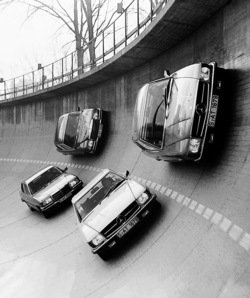 We now use a single rigid body model for the bus and we will do everything in 2D. Below we see a front-on diagram of the bus, with the inside of the track to the left. If we turn on the , then we see that the weight of the bus is supported by two forces, one on each wheel. If we increase \(\theta\) then the weight is supported more by the down-slope wheel, and we also see sideways friction forces appear to stop the bus from sliding. If the slope becomes too steep, then the normal force on the up-slope wheel reverses direction, indicating that it is holding the wheel down onto the road. Physically this cannot happen, so at this point the bus would tip over. We needed this rigid-body model to understand this tipping behavior, as we couldn't model this with the point mass model. Depending on the value of the friction coefficient, the bus may either slide or roll first as \(\theta\) increases.

Having considered both a banked road with stationary bus, and a moving bus on a horizontal road, we can now combine them to see the advantage of having a banked road when the bus is cornering. Choose a bus velocity, and then change the bank angle \(\theta\), so that the friction force is reduced (helping to avoid sliding) and the normal forces on the wheels are more evenly balanced (helping to avoid rolling). For any given speed, we can choose a bank angle so that there is simultaneously no sideways friction force and also exactly balanced normal forces. This is the safest bank angle for this speed.

Design of roads, tracks, and rail

A straight road generally has the center somewhat higher than the edges to allow water to run off. This is called cross slope or camber. When it is desired to have a banked turn, then the outer edge of the road is raised to produce superelevation, with the outer edge rising above both the center and the inner edge. The bank angle is chosen based on the radius of curvature of the turn and the expected speed of cars going around the turn, while still allowing for the fact that cars might be moving slowly or even stopped. The angle should thus not be chosen to eliminate all friction forces when cars are traveling at maximum speed, as this would be dangerous if traffic had to stop on the road.

Velodromes are arenas with tracks designed for high-speed bicycle races, as shown below, with speeds up to 85 km/h. The bank angle on velodrome tracks is chosen to minimize sideways forces on the bicycles when they are traveling at near maximum speeds, so the angle chosen depends on the radius of curvature of the track corners. For example, the Blaine velodrome track pictured below is 250 m long and has a 43° bank angle on the corners and 15° banking on the straightaways. 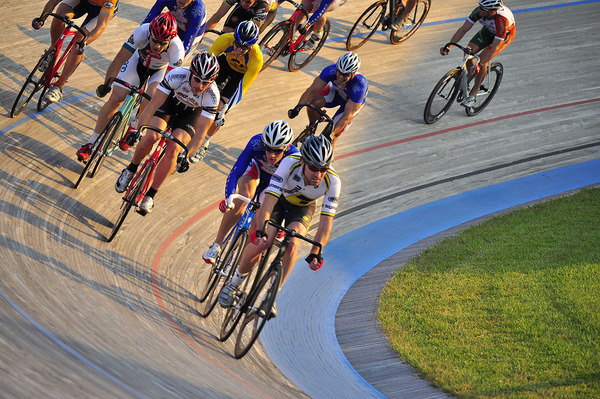 High-speed trains such as the French TGV operate at speeds of over 300 km/h and have run at up to 575 km/h. To accommodate cornering at such speeds, track bends are constructed with a large radius of curvature (at least 7 km for new tracks) and a bank angle of up to about 7° (180 mm maximum superelevation with Standard gauge of 1435 mm). For railways, banking the track is know as cant.

An alternative approach for cornering with trains is to leave the track relatively flat and to tilt the train as it travels around a corner. This allows high-speed trains to operate on regular tracks, while maintaining safety and comfort for the passengers. For example, the Queensland Rail Tilt Train operates at 180 km/h by tilting at up to 5° around corners. As we see from our rigid body analysis above, tilting the train will help with avoiding tipping over at high speeds, but will not help with reducing horizontal friction forces. Even with a tilting train, entering a curve at too high a speed will lead to disastrous results.

The Blaine velodrome in Minnesota was designed by the famous Schuermann velodrome architects and built from the extremely durable African Afzelia hardwood. Velodrome races are always counter-clockwise and use special bikes with fixed chains (no freewheeling, no gears) and no brakes. The corners are scarily steep: 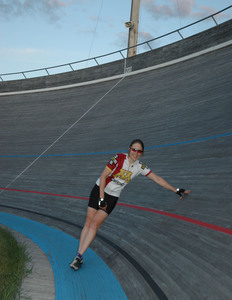 High-speed trains such as the French TGV and German ICE require many sophisticated engineering techniques to enable travel at extreme speed. Very smooth rails are needed, so the track is formed by welding the segments together into one precisely-aligned continuous steel line. The steel rails conduct heat too well for conventional welding, so thermite welding is used to join the track segments.

At high speeds the train drivers are unable to see railway signals on the side of the track. Electronic signaling systems are used to communicate to the drivers, either through the tracks for the TGV or via additional cables for the ICE.

Friction-based brakes produce too much heat, as they would need to absorb the kinetic energy of several hundred tonnes of train moving at over 300 km/h. Instead, dynamic breaking is used, in which the electric motors powering the trains are run in reverse as generators and the energy is shed as heat in resistor arrays. At extremely high speeds, the wheels themselves cannot provide sufficient traction to enable braking, so technologies like magnetic induction brakes are being developed, which directly push against the rails without involving the wheels at all.

The bus model used above is a Setra S 411 HD coach. The mass of the vehicle is 12.6 t and the dimensions are shown below.