A position or point is a single location in 2D or 3D space, which may or may not be occupied by a physical object. Positions exist before we measure or describe them in any way, but to do calculations we need to introduce coordinates for positions. 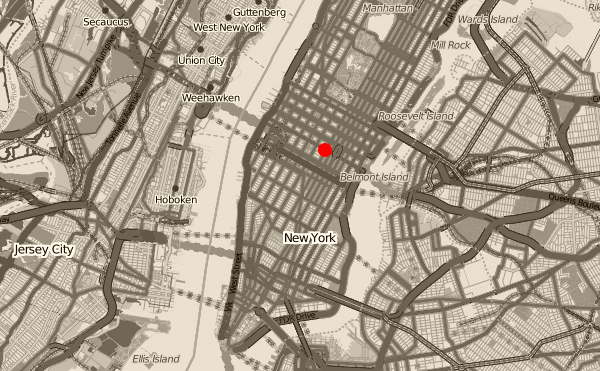 The location of the New York Public Library shown on a street map of Manhattan. Image credit: OpenStreet Browser (ODbL).

Cartesian coordinates (also known as rectangular coordinates) are the regular $x,y$ or $x,y,z$ coordinates in 2D and 3D, with perpendicular straight-line axes.

In 3D the $x$,$y$,$z$ axes are oriented in right-handed order, so that fingers curling from $x$ to $y$ means the thumb points in the $z$ direction.

Cartesian coordinate system, showing the origin $O$ and three positions with their coordinates.

Writing them as a list assumes that we know which coordinate system we are using, and which order the coordinates are in. We will typically write the coordinate values explicitly to avoid confusion. This also applies to vector components.

While the idea of $x,y$ coordinates specifying positions might seem obvious, the use of algebraic quantities to define geometry in this way was a major discovery of René Descartes and a key event in the scientific revolution. Descartes was also instrumental in establishing the philosophical groundwork of The Enlightenment, and we owe to him the famous phrase “Cogito ergo sum”.

Polar coordinates are an alternative 2D coordinate system that are useful for rotating or circular motion.

Polar coordinate system, showing the origin $O$ and three positions with their coordinates.

To define polar coordinates, we relate them to another known coordinate system, typically Cartesian coordinates as follows, where we use the atan2 function.

Conversion between polar and Cartesian coordinates

Angles can be measured in many different units. While radians are the most mathematically elegant unit, their use dates only from Roger Cotes in the 18th century. Degrees are a much older unit, dating back to the sexagesimal number system of the ancient Babylonians, and are convenient for celestial calculations because there are approximately 360 days in one year. Other units include grads (100 grads in a right angle) and mils (various definitions, all approximately equal to a milliradian).

An alternative is to use the atan2 function, which takes $x$ and $y$ as separate arguments and correctly handles the conversion to $\theta$ in any quadrant. This function is available in all common programming languages, including C, MATLAB, Python, and others.

It is important to distinguish between units and dimensions. The base dimensions include mass (M), length (L), and time (T), and can be combined to produce dimensions such as L/T or L T$^{-1}$ for velocity. Each physical quantity such as velocity has just one set of dimensions, and there is no choice in this.

Units are particular ways of measuring dimensional quantities, and include the SI units kilogram (kg), meter (m), and second (s), as well as the customary U.S. units pound (lb) and foot (ft). A given physical quantity can be written in terms of many different units, although all of these must conform to the dimensions of the quantity. For example, velocity has dimension L/T and so it can be written in terms of the units m/s, ft/s, km/h, or many other choices.

Angles are an example of a dimensionless quantity (having dimension 1), but they still have units, typically either radians (rad) or degrees (°).

The SI unit system is the definitive system of measurement used in science and engineering. Other systems, such as U.S. customary units are defined in terms of SI units, so that an inch is defined to be exactly 2.54 cm, for example.

The National Institute of Standards and Technology (NIST) maintains an excellent reference guide to SI units, including precise rules and style conventions for writing units in scientific and engineering work.

If we have a point that moves around in space, then its coordinates will change with time. It is also possible for the coordinate chart itself to be moving in time, so that even if a point remains stationary in space, its coordinates might be changing.